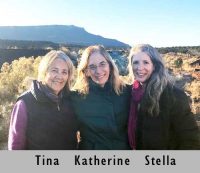 In the weeks and months that followed the Presidential election of 2016, poets Tina Carlson, Stella Reed, and Katherine DiBella Seluja felt the need for strong female voices that could speak in a universal way. In this collaborative collection of poems, We Are Meant To Carry Water, three distinct voices emerged—that of the mythical Leda; the first woman of the Garden, Lilith; and an anonymous migrant girl. They began to communicate with each other, often in the forms of notes and letters in an attempt to understand their lives and to gain empowerment. In issues that transverse time, their voices now address systemic patriarchy, misogyny, and the marginalization of the immigrant.

We Are Meant To Carry Water is a breathtaking and wholly original book, written by three poets as if their voices had merged. In these pages are personae aplenty, sifted from myth: Helen of Troy, hatched from an egg; her mother, Leda, raped/loved by Zeus in the guise of a swan; the archetypal migrant girl, the one we are and have come from; the horned and charred Lilith, and her successor, Eve of the garden; and more. The women mourn, they ask, “Are we only bone, skin and urge?” They speak for one another, “Your story in my mouth.” Their stories “share the same heart.” And of their violators, they keen, “I know where you are/. . ./in harrowed earth, poisoned wells, the back of my throat/filled with fingers.” Of themselves they croon, “We are meant to carry water/spilling from our hips and mouths/while Gods and Swans merely float/or walk its surface.” Here is the song book of our future. Read it out loud, and pass it on.

We Are Meant To Carry Water is a brilliant collection in which three different voices compose one choral whole, re-envisioning a myth into our lives, teaching us (in this complex, terrifying time and country of ours) to enter the space where the “voice can be an asylum” once again. Bravo.

Tina Carlson is a Santa Fe poet and psychiatric nurse practitioner. Her work has appeared in journals and anthologies such as Blue Mesa Review, Bosque, Dark Mountain, Best of Kore Press, 2012, Black Lawrence Press, Noetic Press, and the Telebooth Poetry Project. Her first book, Ground, Wind, This Body (University of New Mexico Press, 2017) explores the destructive effects of war on a family when the embattled veteran has received no help after coming home, as well as themes of nature as redemption, international adoption, and dreams.

Stella Reed’s work has appeared in literary journals and anthologies nationally and internationally, most recently in Bellingham Review, Tahoma Literary Review, Taos Journal of International Poetry and Art, American Journal of Poetry, and They Said (Black Lawrence Press, 2018). Stella is a recipient of the D.H. Lawrence Prize for Fiction from the Taos Summer Writers’ Conference and a grant from the New Mexico Literary Arts Society for the poetry and visual arts project, Ordinary Cloth, the Secret Language of Women. Stella teaches in the WingSpan Poetry Project, bringing poetry classes to residents in shelters in Santa Fe.

Katherine DiBella Seluja is a poet and nurse practitioner. She is the author of Gather the Night (University of New Mexico Press, 2018), a first poetry collection dedicated to her brother, Lou, which examines the impact of mental illness. Winner of the Southwest Writers Poetry Award, her work has appeared in Bosque, Intima, Taos Journal of International Poetry and Art, and Broadsided Press, among others. Katherine holds nursing degrees from Columbia University and Yale University. 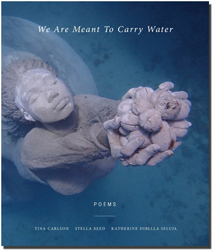 We Are Meant To Carry Water

We Are Meant To Carry Water is available directly from the publisher for $25.00 with free shipping.