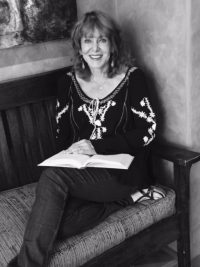 In Joan Roberta Ryan’s first collection, Dark Ladies & Other Avatars, Shakespeare’s dark lady writes her own sonnet. Cinderella reveals the sexual snare she and her godmother set for Prince Charming. And a pile of outgrown Barbie dolls lie about “Bosch-naked,” menaced by demons from The Garden of Earthly Delights. Here, the real and the dream world converge in a broad array of poems about—and often narrated by—the “bad girls” and other mysterious or misunderstood women from art, literature, and life. Many offer new takes—some witty, some chilling—on the shrews, courtesans, schemers, and liars we know from stories and paintings. Others illuminate the real and imaginary figures who people the poet’s own world—from a mad sister she sees in her dreams as a night-blooming cactus to the enigmatic mother who slipped away “memory by memory,/word by word” until “when the final/syllable left, you followed.” And a scattering of irreverent love poems blends all these encounters into a celebration of the ups, downs, and quirky twists of a many-faceted long-term relationship and allows Ryan’s sensuality to blossom into a joyous eroticism.

Dark Ladies & Other Avatars is an exquisite embroidery of delicacy, of color—weave and weft of words playing off each other—each poem seeming effortless, yet tightly contained, brilliant with detail and sly humor. Infused with myth, ekphrasis, fairy tale, the personal, and the persona, the book is tightly woven in wonderfully unique ways.

Joan Roberta Ryan is the mistress of restraint, a poet who knows how and when to use imagery: rose granite, talisman blue, gaudy October…delicately, delicately the poet leads her reader through these gorgeous poems, changing forms just at the right moment, and with surprise.

And Ryan moves easily from language that hints at the Renaissance to the vernacular of a sixties Long Island teen-ager or even the persuasive patter of the advertising copywriter, as the poem requires. Here is the mature poet, and her portraits are as keen as a painter’s eye.

There is something decidedly urbane in the voice of Joan Ryan, the sprezzatura of courtly gestures, the souplesse of real silk stockings, a cheek’s slight flush hidden behind a mask at a masked ball. Black swans, dark ladies, and mortals brooking dalliance with gods circumambulate the perimeter of this literary edifice, rendering the moments of self-revelation at its core all the more poignant. Delicious in their dress-up and the role-playing of myth, these poems lure the reader in with their frisson, the delivery of this daughter of the Bard: a delicious, covert code—but one, at last, that is as bracing as the face of the Magdalene illumined by light cast from a single wick.

Before moving to Taos in 2009, Joan headed her own direct marketing studio where she created magalogs, commercials, and direct mail packages for clients ranging from Dow Jones to Lenox Collections to AOL to Rodale Press. During this time, she also served as President and Chairman of the Board of the Philadelphia Direct Marketing Association and as a speaker on Writing that Sells.

Dark Ladies & Other Avatars is available directly from the publisher for $24.00 with free shipping:

The book also is available from Amazon and independent bookstores.