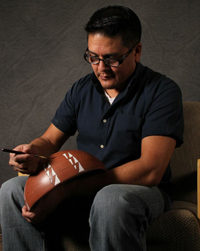 In Ears of Corn: Listen, Native American potter and poet Max Early gracefully details both the everyday and the extraordinary moments of family and community life, work and art, sadness and celebration at the Laguna Pueblo of New Mexico. Within the four seasons — Ty’ee-Tra, Kushra-Tyee, Heyya-Ts’ee, and Kooka — the beauty of Early’s writing beckons the reader to accompany him on the journey between ancient and modern times. Including an historical Preface by the author, an Introduction by Simon J. Ortiz, and photographs of Early’s family and award-winning art, this debut poetry book is profound in its welcome and its teachings.

Early’s poems take us into the cultural continuum of a contemporary Laguna Pueblo artist. Each poem is pottery of words, complete with designs to bring rain, to remember and praise the earth and sky path we humans travel. Early’s poems are earthy, real and compelling. I keep hearing them, like songs emerging from the creative earth.

We are thankful for these poems that cup us through the seasons, past the drought of a spiritual slumber. Like a weathered olla recalling the hold of cold water, we are replenished and bathed anew. We should heed our want and need to the bounty of their beauty and submit ourselves to the lessons therein. Shhh…the poems are speaking: Listen!

—Levi Romero, A Poetry of Remembrance and
In the Gathering Silence
New Mexico Centennial Poet

Max Early was born into a tradition of potters and clay. He creates traditional pottery in order to help save the art of pottery making in Laguna Pueblo. When he began to focus on writing, he continued his passion for celebrating his family,culture, language, and the enchanting New Mexico landscape.

Early’s work also is shown at the Case Trading Post, the Wheelwright Museum of the American Indian; Andrea Fisher Fine Pottery; and the Adobe Gallery, all in Santa Fe, NM; at Bryan’s Gallery, Taos, NM; and the King Galleries, Scottsdale, AZ.

Winner of the 2015 Southwest Book Design & Production Award in Poetry