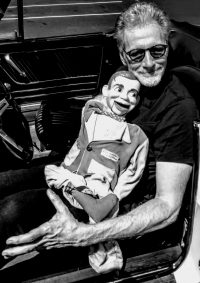 Vanishes celebrates a wandering carnival of mystery and self-deception. An artworld of counterfeit magic where vanishes circulate like a three-dollar bill. Truth is dealt out or handed down in card tricks and in a fictional noir world in which performers eat fire, catch bullets, and engage in a mythos of dancing, gambling, and wearing painted-on smiles. Zuccone’s panoply of performers are half-costumed, hustlers in transit, a battered tilt-a-whirl next to the House of Mirrors, with small time gangsters, insomniacs, and cabaret performers who exist in a world of desperate wonders both entertaining and illusive. Vanishes isn’t about exposing how but rather sharing those instants of attraction and pleasure people feel when being fooled. Here is a fascinating volume of poems that explore a nearly deserted midway of “as if”—the provocative space in between performance and belief.

D E Zuccone’s debut as an agile narrative poet takes place in “a tented world,” a magician’s arena of rabbits conjured from hats, voluble ventriloquist dummies, and “devils with the fingertips of Mephistopheles.” Though there’s a whiff of a bygone era in the sleight of hand realms the poet conveys with unfailing humor and a meticulous attention to detail, this is no exercise in mere nostalgia (“I grew up in invisibility. Words were full/of leaves only frantic motion”). Zuccone’s unerring descriptions (“he finds his Virgil staying in the Penn-Ohio Motel”) have an almost X-ray beauty that suggests the keen, Depression era notations of an Edward Hopper painting. “Pleasure’s such a surprise we have to kiss it goodbye/before it arrives,” the speaker of  “The 6s and 9s” laments. Vanishes is a focused, captivating, and delightfully distinctive first book.

D E Zuccone’s Vanishes meditates on magic, spectacle, and performance. Here are ventriloquists’ dummies, carnival fortune tellers, a “juggler’s assistant, corseted in blue sequins on a cart of Indian clubs.” Here is the Wall of Death, and here comes Death himself, “unshaven, carrying gloves, a flaming skull and bones painted on his jacket.” Also, he’s a little drunk. But Zuccone goes far beyond the carnivalesque, reaching into the vagaries of memory, the complexities of family and childhood, and the persistence of curiosity and regret. For all the flash—and Zuccone writes with great flash—this is to its core a humane and moving book.

—Kevin Prufer, How He Loved Them

Our broken world demands fierce and cunning poetry to tear the veils of delusion from our traumatized minds and to invigorate our appetite for self-knowledge. The poems in D E Zuccone’s masterful new book, Vanishes, are driven by a conviction that the dark luminosity of the underworld gods—a populace of wise guys, thugs, conjurers, and magicians—ascend from their domain with remedial lessons on the paradoxical nature of humankind: our desire to know and not know. At the heart of this paradox, the yearning to be deceived and the craving for revelation is death, life’s central mystery. As Mr. Zuccone’s unforgettable poems suggest, we never tire of revisiting death’s gaudier faux-incarnations at carny shows and circuses. The wild and gorgeous wisdom of this book is itself a revelation: that our impulses toward the tawdry are light-seeking and holy. A date with Vanishes will change your perceptions forever.

“That first trick” as we are instructed early in D E Zuccone’s Vanishes, “like telling a bedtime story relies on your face/being able to appear to invent details of what doesn’t exist as happiness.” Accumulating a host of curious characters and haunted hallways, these poems focus our attention to how we pay attention. Not tricky, but relentlessly curious, asking: What holds us? What compels our brains to fill in gaps and mistake them for facts? Whether turning nothing into something or disappearing that which once appeared solid, line by line, word by word, Vanishes shows how the change you don’t see coming has already begun to occur.

Born in Youngstown, Ohio, D E Zuccone graduated Xavier University with a B.A. in Theology and Education and received an MFA from Vermont College of Fine Arts.  He has worked in Alternative Education in Kentucky and Texas and has been a private Educational Consultant for over twenty-five years. He has professionally presented on Visual Perception, Spectral Filters, Suggestopedia, Reading Disabilities, Affective Classroom Interventions, and Dyslexia.

D E Zuccone has published poetry in Borderlands: Texas Poetry Review, Water Stone, International Review of Poetry, Southern Indiana Review, Schuylkill Review, Hurricane Review, Big River, Apalachee Review, Deep Water Literary Review, and South Florida Poetry Review, among others.  His work has appeared in anthologies from Round Top, Taos Artists, Words& Art, Mutabulis Press, and Big Poetry Review. Mr. Zuccone curated the on-line poetry discussion Ex Libris and was on the Board of Directors for Houston’s Public Poetry. He has been a featured reader in Houston, Brooklyn, Taos, Los Angeles, and a frequent reader at Archway Gallery and Words & Art at Rice University and at the Menil Collection 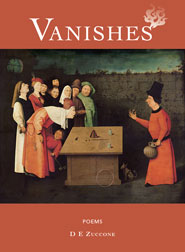 Vanishes is available directly from
the publisher for $25.00 with free shipping.