Manifold: Poetry of Mathematics is a collection of poems exploring the rarely traveled territory that lies between the humanities and mathematics. In her years as a teacher, Dr. Lutken was struck by the strict compartmentalization of subjects and the drudgery with which many adults as well as students perceive mathematics. In these poems she explores the lyric nature of mathematics far from the worksheet and benchmark mindset, broadening the reach of poetry by including hints of the unique experience of mathematical thought beyond words. The poems are not so much written about math as they are written in math—math as metaphor, structure, enrichment—with the hope that ways of thinking and relating to the world found in mathematics might be elucidated in poetry, and conversely, poetry might open to some of the joys and trials of mathematics. Many facets of mathematics—specific numbers, sets, entities such as equations and functions, as well as theorems and conjectures, history and disciplines of mathematics— are woven into poetic experience in the book. There are aspects of insights, discoveries, and thought processes in mathematics which seem especially difficult to convey. Perhaps poetry may help, and mathematics may shed some light on the human condition in return.

If Poetry uses word play to express the deeper realities of life and if Mathematics uses number play to reveal the deeper realities in the universe of number, then it is not surprising that on some deep level the two have an intimate connection, and the one can serve as a source of inspiration for the other. This insight motivated E R Lutken to craft a collection of poems that are wonderfully inspired, derived from underlying mathematical themes and results.  As a mathematician I personally found the poems intriguing and insightful especially as they unite two seemly diverse yet, upon reflection, very creative disciplines. E R Lutken’s work demonstrates that mathematics can provide an entrée into the beauty and creativity of poetry, and conversely, that poetry can provide an entrée into the wonder of mathematics.

E R Lutken’s poems whir and spark with mathematical equations and signage paired with linguistic leaps and the facts of “irrational loss.” Hers is a story of pairings in which “trapped on planes, circles and lines find each other” and “tangled parallel lines meet.” In which language mimics or is “sift sets, jetsam of matter” spelled out in forms from clerihews to Keats-ghosted sonnets. These poems evidence a bold and “frabjous” spirit. As her speaker cheerily confides: “Somewhere I heard there might be new revelations about thermodynamics…Particles in my brain get hot/just thinking about it.”

This elegant volume roams the borderland between language and math, along the way invoking Doobie Brothers and the ancient Greeks, Emmy Noether and Sergio Leone. E R Lutken’s poems are alternately playful and mournful, geometric and oceanic. Math here becomes a solace and a wonder: in the face of loss, Lutken instructs us, “clench the knife-edge of a solvable equation by the teeth/and proceed.”

We are finite but can dream of infinity; we are flawed but can glimpse perfection. Wry, poignant, and funny, E R Lutken’s poems show us that mathematics—like human beings, with our partly-patterned lives—is both earthy and celestial. A delight.

E R Lutken grew up in the South with a family who loved music, poetry, and time spent outdoors, and a few of her family even loved math. She worked summers as an instructor at North Carolina Outward Bound School and studied at Duke University, then the University of Texas Southwestern Medical School. After a residency in family medicine, and some years in urban emergency rooms, she spent time working at a refugee camp overseas. On her return, she had the privilege of working for the majority of her career as a family doctor on the Navajo Nation. When she decided to try something different, she took a job for several years as a middle and high school math and science teacher in rural southern Colorado. Since then, Emily has officially retired and settled down to write poetry, carrying out that secret wish held all these many years. She now divides her time between the mountains of New Mexico and the swamps of Louisiana, enjoying time to wander in the woods, go fishing, and to sing and play old-time music with family and friends. 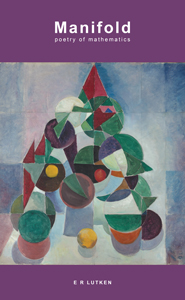 Manifold is available directly from
the publisher for $25.00 with free shipping.