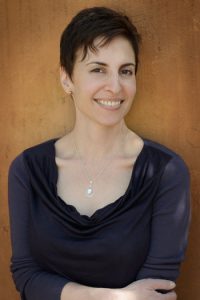 Turquoise Door, Lauren Camp’s fourth book, introduces readers to the cultural anthropology of Taos, New Mexico in the early 20th century. This collection of poems brings the author’s personal attentions and the contemporary realities of the Southwest into a conversation with the historical forces of East Coast transplant Mabel Dodge Luhan—the early feminist, visionary arts patron, and writer who crusaded to create a utopian society in Taos. The poems engage with Mabel, her fourth husband Tony Lujan, and the many talented individuals who visited them in salons and residencies in her adobe home.

Lauren Camp’s poems are full of by-play between words and nature, silence and language, and the struggles of a writer to express her relationship to the exquisite beauties, terrors, and ordinariness of northern New Mexico’s physical and cultural landscapes. Camp empties herself of “past tenses” so she can fully engage “the cleaned-out time” she has been given in her retreat at the Mabel Dodge Luhan House. Often engaged in dialogue with the ghosts of her hostess, and some of her luminary visitors—D. H. Lawrence, Georgia O’Keeffe, Ansel Adams—Camp takes us on a personal journey that illuminates the light and shadow of a world that she—like Mabel—is trying to create anew.

The remarkable Mabel Dodge Luhan was often eclipsed by the company she kept. Yet in Turquoise Door, Lauren Camp celebrates Mabel not just as a conduit and catalyst to some of the finest artists and writers of her century but as an iconoclast who wished to “wake/to the dust-blaze of letters.” These poems, which began during Camp’s tenure as Poet-in-Residence at The Mabel Dodge Luhan House, offer a luminous record of how “a cleaned-out time made long” can enable a writer to taste “the delicate skin of a whole afternoon” and delve into the past to commune with Mabel and her high desert coterie, including D.H. Lawrence, Willa Cather, and Georgia O’Keeffe. These poems, which are also shot through with the deep self-searching of a writer away from the haven of husband and house, struggling to find a home in herself, ultimately prove Camp an admirable retroactive addition to Mabel’s vaunted salon.

—Jessica Jacobs, Pelvis with Distance: A Biography-in-Poems of Georgia O’Keeffe

Lauren Camp is the author of three previous books, including One Hundred Hungers, which won the Dorset Prize and was a finalist for the Arab American Books Award, the Sheila Margaret Motton Award, and the Housatonic Book Award. Her poems have appeared in Slice, Ecotone, Boston Review, Beloit Poetry Journal, and the Poem-a-Day series from The Academy of American Poets. A Black Earth Institute Fellow, she lives and teaches writers of all ages in New Mexico. 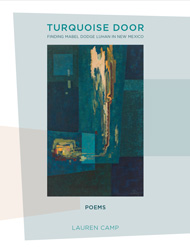 Turquoise Door is available directly from
the publisher for $25.00 with free shipping.