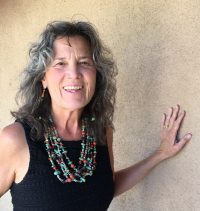 The poems in Renée Gregorio’s Abyss & Bridge tell of the ways that travel can serve to enlarge what is possible between human beings from differing cultures. The book centers on both travel and return, what is required to open oneself to a new world and unpredictable situations, and how one’s sense of camaraderie with others is deepened through dialogue. The main thematic thread is, as one of the poems states: “searching for that common language / that connects to the wide sea / as much as the sea within.”

In this radiant collection, difference provides a necessary bridge that returns us to ourselves and to each other and shows us how to move out, and move back in, with a new sense of belonging, both to the world at large and to a sense of place.

Questing and questioning are central to the poems in Renée Gregorio’s new book, Abyss & Bridge. “. . . is this sense of terror / at the core / my own / or the world’s?” she asks, and “what is it to belong / like the stone to the riverbed?” Taking us far from her own “iris patch” and back again, always sensitive to the embodiments—scents, contours, griefs, and desires—of the places and people she encounters, as well as to her own “shape-shifter” self, Gregorio constructs an atlas equal parts humane observation and self-reflection. “I want home to exist wherever I am,” she writes, and with these poems of tender regard she has given us too a home in the world.

How to say, in all honesty, “Yes to all of this”? Renée Gregorio’s poems take on the never-finished work of acceptance. Along the way, her love of the physical world and its creatures transports me to a country of praise, thanksgiving, and rhapsody.

Renée Gregorio’s poems flow like an elemental river of hope through a journey that is both radiantly international and locally resonant with depth. Whether she is writing of the massacre at Acteal, the Zapatista struggle, or Sicily or India, or celebrating her twentieth year of marriage or the threads in the sewing of her grandmother, you will be poetically engaged with her actually realistic lyricism and tonal brilliance throughout.

Originally from Boston, Renée Gregorio has lived in New Mexico since 1985. Her first home was in Taos where she moved after earning a Masters’ degree in creative writing from Antioch University, London. With a few like-minded others, she founded and edited The Taos Review, one of New Mexico’s foremost literary journals. She also organized reading series for the Taos Poetry Circus and SOMOS. At present, Renée is a co-founder of the publishing collective, Tres Chicas Books, alongside Joan Logghe and Miriam Sagan.

Beside publishing many volumes of poems over the past four decades, Renée has worked as a freelance literary editor, a proofreader and drafter for the state legislature, a writing teacher, and a somatic coach. She’s taught poetry around the state, served as a visiting professor at Colorado College, and, with her husband, John Brandi, led a course for San Juan College students in Chiapas, Mexico, on crafting poems from travel. Renée and John sometimes work on a poetic dialogue after traveling together—the Press at the Palace of the Governors published one such exchange in Road to the Cloud’s House, prose poems based on their observations in Chiapas, in a limited-edition letterpress volume.

Renée’s poetry is informed by the expansive landscape of northern New Mexico as well as by journeys to Cuba, Vietnam, Laos, Thailand, India, Bali, the Himalayas, Italy, and Greece. In her work it is evident that she loves foreignness as well as form. Her long-time practice of the Japanese martial art aikido taught her what it means to occupy form through the body. Her poems emerge from the blood and heart of the everyday as much as from her travels. 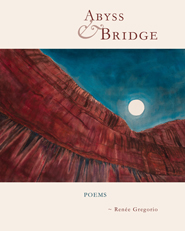 Abyss & Bridge is available directly from
the publisher for $25.00 with free shipping.