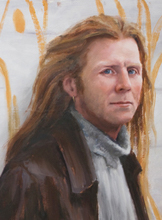 Seamus Berkeley is widely considered one of the most prominent artists in the Southwest. Dublin-born, Berkeley moved to Taos, New Mexico in 1999 in order to integrate into a more diverse artistic community, drawing upon Taoseños as subjects and inspiration for his paintings. In 2005, Seamus opened a studio in Berkeley, California and divides his time there and at home in Taos. His paintings are extensively collected, both nationally and internationally, most of his work being commissioned fine art. Berkeley has won several regional and national awards for his artwork, including Best Portrait at the Oil Painters of America show in 2000. He is the founder and past president of the Taos Society of Portrait Artists and a member of the Oil Painters of America. Berkeley’s work has been featured in such publications as Southwest Art, Information Warehouse, The Taos News, Art-Talk, and The Trail-Gazette.