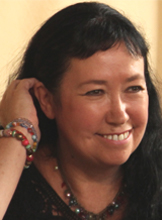 Pascale Petit’s latest collection is What the Water Gave Me: Poems after Frida Kahlo (Seren, 2010), which was short-listed for the TS Eliot Prize, Wales Book of the Year, and was a Book of the Year in the Observer. Black Lawrence Press published an American edition in 2011. She trained at the Royal College of Art and spent the first part of her life as a visual artist before deciding to concentrate on poetry. She has published five collections, two others of which, The Huntress and The Zoo Father, were also short-listed for the TS Eliot Prize and were books of the year in The Times Literary Supplement and The Independent. In 2004, the Poetry Book Society selected her as one of the Next Generation Poets. She has worked as poetry editor at Poetry London and was a co-founding tutor of The Poetry School. She currently tutors poetry courses for Tate Modern and is the Royal Literary Fund Fellow at the Courtauld Institute of Art.