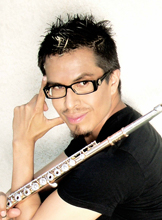 Born on the Navajo Reservation, Jerome Jim is an active and versatile musician with styles ranging from traditional Native American to the classical flute repertoire. He received his undergraduate degree from the University of New Mexico in European Musical Performance in Cultural Context, a degree that encompasses musical performance, history, art history, literature, and languages. He appeared with the Grand Canyon Music Festival in the world premiere of Guardians of the Grand Canyon, by composer Brent Michael Davids, which was broadcast on PBS in the spring of 2002. He also has appeared at numerous University of New Mexico public events performing Native American works for the flute. Now primarily a recitalist, since 2006, Mr. Jim has worked collaboratively with pianist Amy Greer on a variety of projects, including several recordings of rare and unknown works for flute and piano.